When I moved to Asheville, North Carolina, I started touching locks. That was a new one, even for me. I lived in a big drafty house with two room mates who might as well have been furniture, and a cat who did a spot-on impression of someone trying to break into my room to kill me every evening.

Before I could even think about falling asleep at night I had to go around the house and check all the locks and windows. After I touched every lock and shook every door, I got into bed and did a mental checklist. Somehow I’d convince myself that I forgot to check the front door, or the back door or a sky light in the attic so I’d get up and do them all again. Sometimes I would force myself to stay in bed and try to assure myself that every lock had been sufficiently man-handled. Every window was shut tight. But if I didn’t check, I didn’t sleep. If I checked five times, I caught a few winks.

So I started Internet dating.

My intentions on the Internet were not related to love. Of course I hoped I’d luck into some whirl-wind romance you see in the movies, but after a balding single father asked me to pour a pack of Skittles into my mouth and then kiss him so he could “taste the rainbow” I gave up that ghost.

But I continued updating my profiling and scrolling through pictures just to keep me from developing any more neuroses and anxious tics. Instead of touching locks, I went on a date with Paul.

I don’t buy drinks for girls.

Well, that’s an odd way to start the evening.

But I didn’t think too much about it because hey, at least he was being honest right?  Everything else seemed pretty normal. Conversation was adequate, we shared some common interests and he wasn’t an unfortunate looking individual. All in all, it was shaping up to be a mediocre night.

I did find it strange when I excused myself to the bathroom and returned to find him with his laptop open on the bar and ear buds stuffed securely into each canal. I climbed onto my bar stool and sipped my drink more than a few times before he decided to acknowledge my presence. He declared it was time to move to a new bar and closed his laptop with an air of confidence.

As we trekked through the snow to the next spot, I noticed that he seemed unwilling to keep the same pace as me. Being of a fairly tall height and owning a set of fairly long legs, I am often scolded for getting ahead of others. Being unable to keep up with my date though, I figured the snowy weather must be slowing me down. I took a few little quick steps to catch up to him and a couple strides later, he’d be in the lead again. It was annoying but still not enough to set off my internal alarm.

Walking in to the second bar, he obviously got to the door before I did and instead of holding it open for me like any normal guy on a date might do, he opened the door just wide enough for his body to slip through and dropped his hand quickly so the door slammed shut before I could grab the handle.

Son of a bitch.

The second bar had his friend waiting inside and after introductions, I found myself seated between the two as they carried on a conversation that had nothing to do with me and gave me no opportunity to join. Without warning, Paul got out of his seat to have a cigarette outside and I was left with Dustin.

I feel bad for guys with names like Dustin or Rusty or any other name that sounds like it might belong to a Little Rascal or a pet Cockatoo. I wondered if such a childish name affected his personality or development from a boy into a man and as I wondered, he addressed me for the first time.

Paul likes you. He’s been looking forward to your date all day.

He doesn’t seem very excited, seeing as I’m inside talking to you while he’s outside smoking alone.

I have a nasty sinus infection right now. My girlfriend of four years just dumped me and I’ve been crashing on my sister’s couch for the last few weeks. Paul’s been a good friend and invites me out so I don’t feel too lonely. We could make out before he comes back if you want though.

I’ll pass, but thanks.

Thankfully, Paul decided to grace us with his presence and my awkward moment with Dustin was over. Until he said

I asked your date if she wanted to make out and she said no. I hope you have a better chance with her than I did

And then he and Paul proceeded to argue with each other, leaving me trapped in the middle drinking my beer.

At some point they stopped arguing but I had already zoned out and gone to that place where your eyes glaze over and you stare at a wall and think of better things. Dustin pointed out that Paul had left his seat again but this time he had stationed himself on a stool by the door and was busying himself with various text messages. I looked at Dustin and asked

What are we supposed to do with that?

I think you’re supposed to go after him

And I laughed because obviously that was a joke.

Dustin shrugged and decided this was his cue to leave. He put on his coat and wished me luck. He walked past Paul like a stranger as he left the bar and Paul didn’t miss a beat in his texting.

I sat at the bar for several minutes after Dustin left wondering what exactly I had gotten myself into. I decided I was going to have a smoke and finish my beer on the patio and then I would be on my way. This date was quite obviously a bust, no sense wasting the drink I had bought for myself.

Out on the patio, I was half a cigarette in when Paul remembered he was on a date. He came out and struck up a conversation as if we were old friends. He asked me some random question and as I was answering he interrupted me for the first time.

It took me a minute to answer the question because what I was saying had nothing to do with my sexuality or anything sex related. Then I remembered we were on a date, a shitty one, but a date none the less, so obviously I’m not a lesbian if I’m out with a guy. But I simply said

And he looked at me skeptically and then made a sort of Hmph sound as if he were so sure he had me pegged and was surprised by the fact that I was straight.

I continued to tell my story and was beginning to forget about his interruption when he once more, butt in.

You know how sometimes, people can have this sort of cocky, full of themselves attitude but its sorta endearing or makes sense in a way; it just kinda works for them? That’s not really true in your case.

Stunned, again, it took me a minute to respond. Nothing I had said thus far was about me or my accomplishments. I hadn’t corrected his grammar or said anything snarky but all I could manage to say in reply was

And again he made that Hmph  sound.

At this point I stopped talking. He started to tell some story of his own but I was looking at the road trying to remember where I had parked and the easiest and quickest way to get me away from this date and back to my car. I was snapped out of my escape planning when he asked me

Are you sure you’re not gay? Not even Bi?

You already asked me that and I already told you, I’m not gay.

And he said Hmph.

This was my cue to leave. I had to get the hell away from this guy as fast as I could but I have this nagging politeness (Catholic guilt) that I can’t seem to overcome. He hadn’t pushed me to the point where I could cause a scene and cuss and scream and leave in a huff so I politely thanked him for an interesting evening and told him I had to get home. He asked me if he could walk me to my car and for some brilliant reason I said

Suddenly, he stopped and when I caught up to him he grabbed my hand and pulled me into the alley way. He pushed me up against the wall and began to, well, I assume he was trying to kiss me but it was more this strange, sloppy placing of his open mouth on various parts of my face and me sputtering

I was so stunned and confused that this strange insulting night he had created for us, in his head, was some sort of foreplay, and my general disgust and anxiousness to get away from him was mistaken for playing hard to get. He pulled off my knit cap, and threw my scarf onto the snowy road and then bit my neck, in what I’m sure, he thought was an intensely passionate and sexy way.

Perhaps if this night had gone well, perhaps if he hadn’t accused me of being a closeted, arrogant lesbian; perhaps if he had opened a door, bought a drink, pulled out a chair or done anything even remotely nice; I would be more willing to partake in this ridiculous alley way make out scene.

Are you kidding me?

I picked up my hat and scarf and started walking. He trailed behind me quietly and I assumed he was trying to come up with an eloquent way to explain himself or possibly apologize. Instead he said

This made me stop and turn around. I said

Not the way you look, you look fine. It’s just that you’re so abrasive and dismissive that you’re kinda like a dude.

I was preparing to say more but before I could get up on my high horse, his crazy open mouth was barreling at me again. It was so obnoxiously bad that I almost started laughing again but I managed to maintain my anger and wiggle away from him.

Luckily, we were near my car and I was almost home free. When I got to my car, he was on the other side, waiting to be let in.

What do you think you’re doing?

He looked confused by this question.

It’s snowing and I walked here. I need a ride home.

In the car, I turned on some excessively loud music to avoid any further communication. Paul, obviously not one for taking hints, turned it down in order to ask

Do you want to go somewhere and get a late dinner? A couple places are still open. My treat.

That sounds good, can I come to your house?

I laughed and said

Outside of his house, he tried to kiss me good night and I actually hit my head on my window from pulling away so quickly. He said

I had a really great time tonight. I hope we can do it again soon.

Jessica Pepper
I’m an artist, writer and St. Petersburg Florida native. My work is awkward and silly and honest, just like me. I like to make people laugh and think, it is my favorite thing to do. 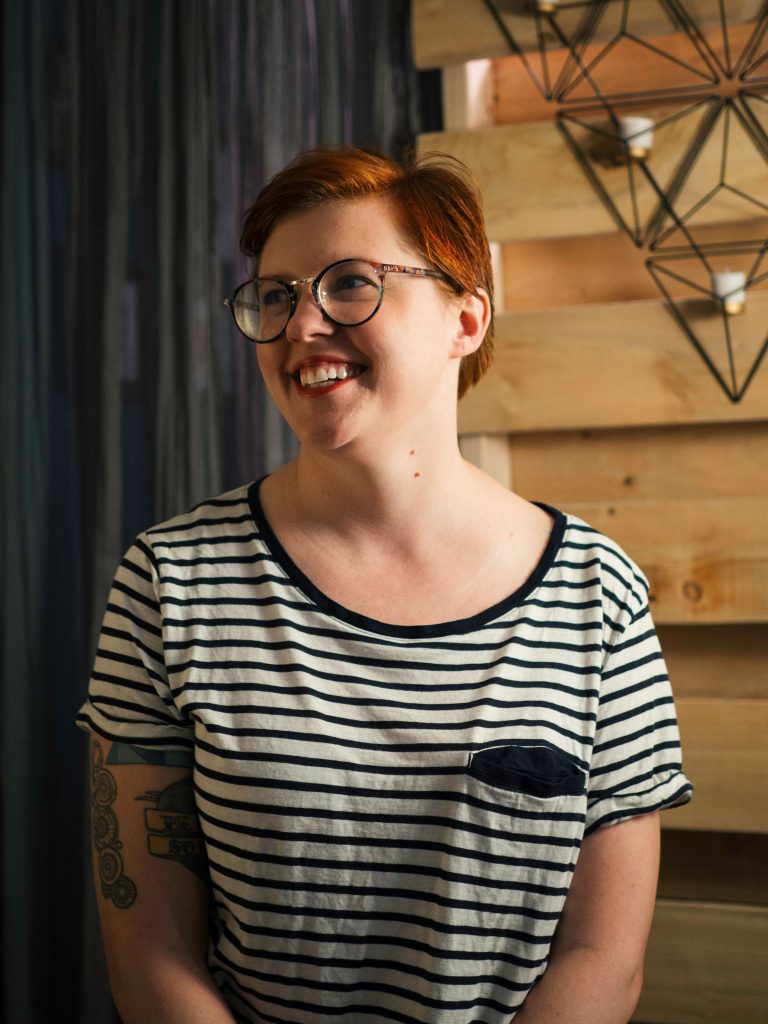